Africanized "killer" bees resemble regular honey bees so much that the only way to tell them apart is by measuring their bodies. Besides different wing measurements, Africanized bees tend to be slightly smaller and darker. 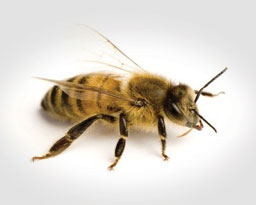 These aggressive bees are known for defending their colonies and attacking when threatened.

Where Do Killer Bees Live?

Killer bees originated in South America but began spreading throughout North America in the 1990s and 2000s. They can be found living in most of the Southwestern United States, recently branching out into Utah, Georgia, and Louisiana.

Africanized bees are less selective about their nesting sites, so they often build colonies in unique places like tires, crates, boxes, grills, exposed tree limbs, and even holes in the ground.

Africanized bees produce honey like any other bee, and they are the bee of choice in many locations, especially in Central and South America, which rank among the world leaders of honey production.

Created by biologist Warwick E. Kerr, these bees were designed to produce abundant honey in tropical climates. A single hive of Africanized bees can produce 100 kilograms of honey annually — far more than the 3 to 5 kilograms produced by other bees.

Because killer bees spread throughout the Americas without the help of humans, they have earned a reputation as one of the world’s most biologically invasive species. In Arizona in 1994, only 15 percent of local bees had been Africanized. By 1997, the number reached 90 percent. Though they are more territorial, Africanized bees are the most popular bees in South and Central American beekeeping.

Given their genetic dominance and their ability to out-compete, out-produce, and out-pollinate European bees, economic pressures have forced many traditional beekeepers to switch to this more aggressive breed.

Like other species of bees, Africanized bees pollinate plants. Compared to their European counterparts, they begin pollinating at much younger ages and harvest more pollen to feed their greater numbers of larvae. Africanized bees are also more sensitive to sucrose, so they tend to harvest pollen from sources with lower concentrations of sucrose.

Foraging at older ages and harvesting pollen with more concentrated nectar, the Western honey bee was selectively bred over centuries for their docile personalities, which is different from the more defensive Africanized bees that were created quickly in the 1950s. To fend off their aggression, Africanized beekeepers often used smoke, veils, and full bee suits when working with these fearsome bees.

How Are Africanized Bees Different?

Africanized bees differ from European honey bees in that they are: more likely to swarm, migrate when food supplies are low, relocate their colonies when stressed, display defensiveness when swarming, guard hives aggressively, live in underground cavities and deploy more bees to chase threats far from the hive.

Though Africanized bees cannot survive harsh winters or dry summers, they are more resistant to parasites like mites, and fungal diseases like chalkbrood and foulbrood.

While the venom of an Africanized bee is similar to that of a European honey bee, their venom is less likely to trigger an allergic reaction that could lead to death. However, Africanized bees tend to attack in swarms — presenting a greater danger to humans.

Deaths from Africanized bees are related to their persistence and numbers rather than the potency of their venom. While honey bees sting to educate and defend, killer bees mobilize as an entire colony if their hive is attacked. Due to their sheer numbers, Africanized honey bees can kill large mammals and even humans — especially children and the elderly, who have a more difficult time escaping.

Why Do Killer Bees Attack?

Africanized bee populations are accustomed to defending against honey hunters who destroy their nests — resulting in more defensive bee behaviors than Western honey bees, which were bred for centuries for their gentleness. Killer bees are quicker to react to disturbances and they will chase an intruder more than a quarter-mile for an attack.

Known to kill horses, humans, and other large animals, killer bee victims receive 10 times more stings than victims of European honey bees. Killer bees are known to kill in swarms ranging from 30,000 and 100,000 bees, darkening the sky from their sheer numbers.

While Africanized bee incidents are less common than they were during the first wave of colonization, this reduction is largely the result of improved management techniques such as locating nests away from human habitation, creating barriers around livestock and educating people about the dangers of feral colonies.

You can prevent attracting Africanized bees and limit the likelihood of an attack by bee-proofing structures, removing debris, and closing off walls, chimneys, and plumbing gaps with mesh or caulking.

Due to their sheer numbers and aggressive nature, a pest control professional or beekeeper should address an Africanized bee infestation.

At peak rates in tropical climates, Africanized bees expand at a rate of 1.2 miles a day. Africanized honey bees invade European honey bee hives by killing the queen and establishing their own queen.

European hives are also colonized by crossbreeding during the new queen’s mating flight. Since Africanized drones are stronger, faster, and more numerous than their European counterparts, the result is almost always Africanized offspring.

Through these methods, they are able to expand at a rate of 200 to 300 miles a year — within cold weather limitations of 32° latitude in the Southern hemisphere and 34° in the Northern hemisphere.

If Africanized honey bees chase you, run in a zigzag pattern and seek shelter in a house or car. And if you are attacked, run away from the area with a shirt covering your head and mouth. Never stand and swat the bees.

If you are stung, remove the stinger immediately by scraping instead of pulling, and seek immediate medical attention if you have trouble breathing.

Vibrations from power equipment and lawnmowers can also activate Africanized bees. Always avoid swarms and nests and seek help from a professional. Most injuries are the result of humans trying to remove nests without professional help.

If Africanized bees are terrorizing your home, get some much-needed relief from Nader's Pest Raiders by filling out the form below.