Paper wasps are social insects that build grey, paper-like nests in trees and vegetation, or under the eaves of homes, docks, and garages. 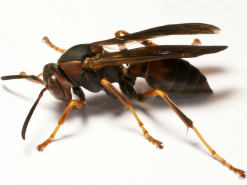 Getting their name from the material they use to build their nests, paper wasps are also known as “umbrella wasps.” With 22 species in North America, they have slender bodies, yellow markings, and black wings.

Wasps have more defined waists than bees, their colors are often brighter and they are more likely to sting — though most wasps don’t even sting. Most wasps are solitary, but many will build a communal nest for their offspring to mature in.

With over 100,000 species worldwide, wasps are one of the most important flying insects. They keep other insect populations down and also engage in pollination. In fact, nearly every pest insect on Earth is preyed on by a wasp species — either as food or a host for its parasitic larvae. Wasps are so good at controlling pest populations that agriculture now deploys them to protect crops.

Some wasps are social and will become aggressive when defending their nests, but most wasp species are solitary and non-stinging. They spend their days foraging for food and finding insects to paralyze and lay their eggs inside — providing a built-in food source for their offspring.

Paper wasps are semi-social insects with a caste made up of workers, queens, and males. Fertilized queens overwinter in protected spaces beneath tree bark or in cracks and crevices in homes.

When spring arrives, they select a nesting site, begin building a nest and lay their eggs. In late summer, the queen stops laying eggs, and the colony declines.

Paper wasps can be annoying, but they are usually considered beneficial insects. They prey mainly on insects and tend to avoid humans when possible. To avoid their wrath, try to avoid their nesting sites.

Where Do Paper Wasps Live?

Paper wasp nests are built from wood fiber collected from plants, which is chewed to form paper-like, hexagonal cells that come together to form a nest resembling an upside-down umbrella. Mature nests contain up to 200 cells.

Since her nest is fragile, the queen will seek out a protected area like a doorway, eave, doorframe, tree limb, dense vegetation, or even stacks of wood for her kingdom.

Forging during the day and resting at night, paper wasps prey on caterpillars, flies, plant nectar, and beetle larvae, which they often feed to their own young.

Once her larvae grow to adulthood, the queen reigns and lays eggs as her young gather food, build nests, and tend to the larvae. By late summer there are as many as 5,000 wasps in a nest.

If the queen dies, the most aggressive female will become the new queen and begin to lay her own eggs. In late summer or fall, males, unmated females, and the founding queen will all die. Mated females will go into hibernation during the winter and emerge in the spring to form colonies of their own. Only fertilized queens will survive the cold.

What Are Paper Wasps Attracted To?

Paper wasps are attracted to things that resemble their favorite pollination targets, so avoid wearing perfumes and bright colors, or patterns that could resemble flowers.

Do All Paper Wasps Sting?

While paper wasps can be dangerous and aggressive, they generally do not attack unless they or their nests are bothered. Paper wasps will sting to protect their colony, releasing toxins that can be harmful to mammals like birds, wolves, cats, and dogs.

Humans can also experience severe reactions when stung by paper wasps. Wasps can sting repeatedly; causing pain, swelling, and whole-body effects that can trigger allergic reactions that may result in death.

To avoid their stings, leave the immediate area and don’t swat or squash wasps. These behaviors will release pheromones that attract other angry wasps.

After a sting, wash the wound with water to remove the venom and treat with an antihistamine product that can help ease the pain. If you start to experience dizziness, fatigue, nausea or trouble breathing, seek immediate medical attention.

Wasp stings may also transfer harmful bacteria that could result in infection or even sepsis. If the wound remains hot and inflamed for more than eight to 12 hours, seek immediate medical attention.

Getting Rid of Paper Wasps

There are several methods of getting rid of wasps, some more effective than others. Since a wasp may travel up to 1,000 yards in search of food, wasp traps aren’t always adequate. Still, setting out wasp traps in early spring, when there are fewer wasps, is the most practical method. By killing the queen early in the season, you can prevent the appearance of thousands of workers.

You can also use a glass wasp trap or make a homemade trap out of a 2-liter Coke bottle with dish soap at the bottom.

Professionals can remove wasps in a non-toxic way using vacuums or dusts. Nests in wall voids are particularly difficult to remove and require professional help since failed removal attempts could push a nest further into a house. Never try to burn an active wasp nest, since this will make them angry and aggressive.

How Do I Keep Paper Wasps Away from My House?

To prevent wasps from setting up near your home, seal up any entry points like unsealed vents, torn screens, window cracks, and open dampers. Hanging a fake wasp nest could also prevent industrious wasps from building nearby.

In the spring and summer, when wasps are looking for protein, remove any outside pet food or picnic scraps, open garbage or compost bins. In late summer and early fall, wasps start to crave sugary foods, so watch out for open soda cans, fruit juice, and fallen fruit. Cover compost and avoid walking barefoot near fruit trees.

Painting the eaves of your home sky blue can also prevent nest construction since wasps will not build a nest on blue paint.

If wasps are spoiling your outdoor fun, fill out the form below and one of Nader's Pest Raiders dedicated professionals will send these pests packing.