Bats are the only mammal that can fly and unlike birds, use both legs and wings to fly. 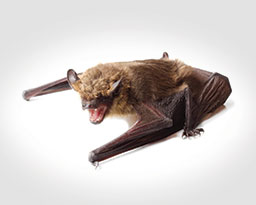 Bats use echolocation (similar to radar) for flying and gathering their food. Their diet consists of insects. They have one young per year usually in the early late spring/summer period.

They will form "maternal colonies" staying inside buildings until late summer when the young can fend for themselves. In the winter time they nest in caves or abandoned mine shafts. In some southern areas they may stay active all year.

They carry two diseases: rabies and histoplasmosis. Rabies in bats is no more common than any other animal and bats do not become aggressive when affected by rabies. They usually will just lie on the ground, and it is rare that humans contract rabies from bats. Histoplasmosis is a disease contracted by humans when the dust from their droppings is inhaled into the lungs.

Exclusion methods are the best and only way to ensure true prevention. Exclusion should be performed in the late fall after the bats have left the structure for the winter and prior to their return in the spring. A daytime interior inspection of the roosting site is necessary to make sure all bats have left for the winter prior to exclusion.